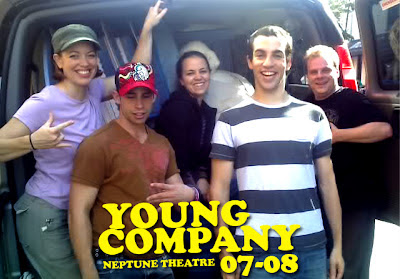 Stick a fork in it, the tour is done.

Although it has only been about three days since the tour has finished, I think I can safely say that I enjoyed myself; thanks [in most part] to the people in the company, Adam Bayne, Gillian Ferrier, Darcy Lindzon & Kim Parkhill (it's in alphabetical order Kim, don't worry).

When I was preparing to audition for the Young Company back in July, I had asked myself if I wanted to spend 4 months with a group of enthusiastic thespians. It seemed to be in my experience, that when thespians get into groups of 3 or more, drama ensues. And I can't handle drama.

I weighed the pros and the cons. The pros were a kickarse job, performing for kids, being paid to act & travel, and it would get me out of working at Empire Theatres for a few months. The cons... drama.

The answer was a very hesitant 'yes'. 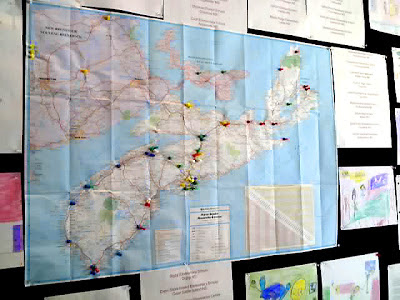 Here's a map with some of the spots we visited.

Looking back, the gamble paid off. There was some drama, but if you put 5 people in a van for 4 months, there's bound to be a couple of pissy moments. Overall, it was a very positive experience for me; definitely a complete chapter of my life.

The tour afforded me the chance to see every fucking nook and cranny of the Maritimes at light speed. Believe it or not, 4 months is not enough time to do a school tour and be a tourist. Sadly, I wasn't being paid to be a tourist.

Someday, I will return to the highlands of Cape Breton and take my own sweet time. That's a promise, right there.

Artistically, I think I have grown... I think. I'm still in shock from 4 months of 2 shows; I need a bit of time to just sit back and absorb what I have learned.

I was exhausted in early December, but the kids kept me going (that sounds so cheesy). Performing for kids is like nothing else; a crowd of kids is like a mixture of a rock-concert, a pro-wrestling show, and a strip club. It's that weird fucked up mix that I loved.

I wish adults would go that apeshit for anything.

Next week, I'm moving into a new apartment with my ladyfriend Kristin and going back to work at Empire Theatres. I am oddly excited to go back to my "regular life". It should be nice to sit down and breathe. 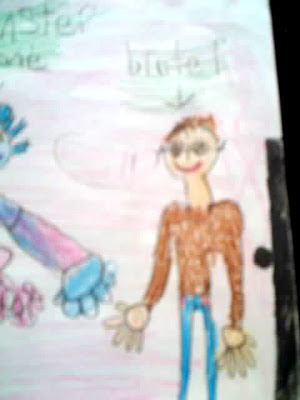 Some fan-mail: A drawing of myself as Eric from an Elementary student.

A huge thanks goes out to the kids, Adam "Banye West" Bayne, Gillian "Ferry-er" Ferrier, Darcy "Darce-Hole" Lindzon, Kimberly "Kimbo Slice" Parkhill, and our director Samantha "Sambo" Wilson.
Posted by GlenJM at 6:44 AM